Tile layouts & where to use them

In addition to choosing the tile itself, choosing the right layout can be a fun & easy way to express your style, personality, & creativity.

Each tile in a stacked layout is lined up with the next to create a clean, simple grid. This layout is quick & easy to install. Depending on the type of tile used, this layout can be used to create either a modern, minimal look or a very traditional look. We often recommend this layout for large format tiles and anywhere a seamless look is desired.

Design Tip: Stack rectangular tiles vertically to emphasize & enhance the height of your space. This creates a fun, modern look.

Rotate a stacked layout by 45-degrees and you have a diagonal layout. This very traditional layout is most often associated with square tiles, but it works for planks and rectangles, too. Because it elongates the lines in your tile, this layout can make a room appear larger. 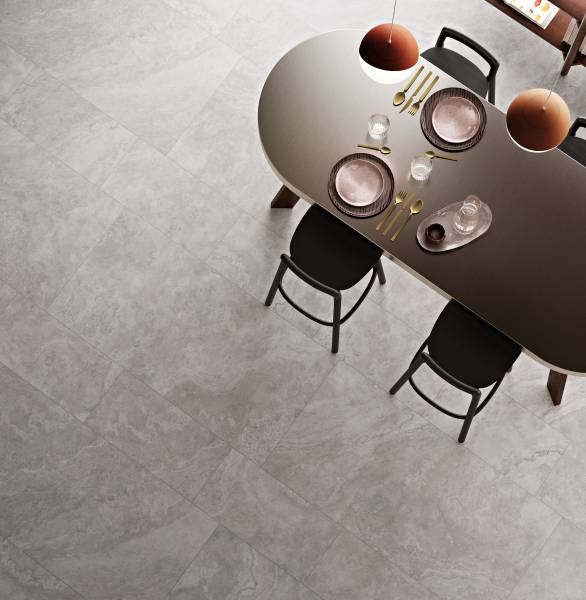 Half Joint or "Brick" Joint

This go-to layout goes by several other names, including running bond, off-set lay, & subway pattern. Popular because it is traditional & easy to install, each tile in this pattern is centered on the grout line above & below it. The end result is simple, structured, & symmetrical.

Design Tip: Use small accent pieces between each tile to turn this simple layout into a one-of-a-kind focal point.

Similar to a half joint, each tile in a third joint is offset from the tiles above & below it by one third the length of the tile. This staggered effect can either create either an alternating pattern or a stair-stepped pattern. The tile council of North America recommends a third joint for large format tiles since it minimizes lippage, allowing for tighter joint spacing.

Design Tip: We recommend a third joint for tiles that have a lot of movement, like marble & slate, because it disperses veining & color more evenly.

A herringbone pattern is made up of interlocking V-shaped rows. This layout has been trending for a while as a more engaging, graphic way to install both large & small rectangular tiles. A diagonal herringbone, where each piece is installed at a 45 degree angle is formally called a diagonal herringbone, & it can be oriented up-&-down or left-to-right. A straight herringbone creates a stair-step effect.

Design Tip: Use a contrasting grout color on a herringbone pattern to further emphasize the unique design.

Chevron is visually very similar to a herringbone pattern. The difference is that, while a herringbone is made up of rectangles, a chevron is made of parallelograms. Because both short sides are parallel to each other at a 45-degree angle, a chevron makes a true zig-zag rather than an interlocking pattern. Tiles that are designed to be installed in a chevron come in this shape from the factory.

Design Tip: Most often, a chevron is shown with the short sides together running vertically. This creates a wide zig-zag pattern. However, the same shapes can also be installed with the long sides together vertically, which gives the look a more modern twist.

Sometimes called a hopscotch pattern, a pinwheel uses a combination of a large and small square or a square and a rectangle to achieve a radial effect that resembles a pinwheel. This layout works best on the floor and is most often used in kitchens & sunrooms.

Design Tip: Since it works with any two different sized squares, the pinwheel pattern offers the opportunity to incorporate two different products for a pop of color or texture. Just make sure they are the same thickness! 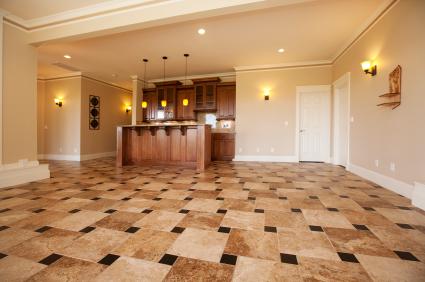 This is just what it sounds like: Each tile is offset a random distance from the tiles around it. If you are selecting a wood-look tile, we will probably recommend that you use random joints since this is how hardwood flooring is installed.

A Versailles pattern uses a combination of four different sizes (two squares & two rectangles) to create an intricate interlocking design. Named after the lavish floors in the Palace of Versailles, this pattern is as about as traditional as it gets, but it can be styled modern as well. We love to see it in kitchens, pool decks, verandas, & other large spaces. If your style is traditional or modern-traditional, this is a wonderful selection.

Design Tip: We are likely to direct you toward travertine or marble if you want this look, because very few porcelain or ceramic lines come in all four necessary sizes. But this pattern looks best in natural stone anyway, because stone has inherent variation, classic beauty, & a softer texture.

A basket weave pattern is made up of alternating rows of vertically & horizontally stacked tiles which mimic the over-and-under motion of a woven basket. Although this timeless look is commonly associated with outdoor applications, such as patios and walkways, it also works beautifully in outdoor-adjacent settings such as mudrooms, sunrooms, and lanais. This layout is appropriate for traditional and transitional homes alike and is a great way to create interest without being too trendy.

If you are seeking a truly unique result, don't be afraid to come up with your own layout. Simple shapes and ordinary sizes take on a new life when combined in unexpected ways.

How many of these have you used in your home? Let us know in the comments below!

Preparing to make your tile selections